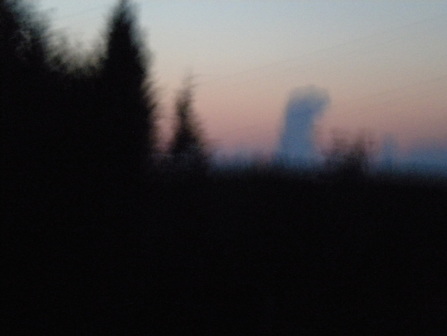 Visibility is at the root of good writing. Language as it sits in the human brain is consciously visual. We are always aware of seeing language, aware of seeing images, schematics, and shadowy configuration of thought . We say, “in the mind’s eye” when we want to describe what’s going on in our head when we think something. We don’t say in my mind’s nose. I want to believe the recent neuro-babble that says that 70% of our brain is engaged in visual processing. And so I will. (I'm seeing a brain with a sloshing tide of kaleidoscopic activity spilling forward from back to front.)

It's only when we go about communicating with another brain that sound comes to the fore. "I hear you." "That sounds just fine." Smell may be the oldest and most basic of our sense. Touch is surely the most sensual. Taste makes the day the sweet thing it can be. But sound and touch and taste and smell diminish from themselves as they hit our brain. They undergo a sea change and become recorded in a code not their own. Only sight seems to lodge in the brain in something like its native state. We can retrace its lines with some on-board mental tool that works in the same way it does.

It seems we have an intuitive appreciation of the visual nature of language – particularly written language. What we're going to be discussing here as visibility, is related but not identical to what often gets discussed in English classes as problems of clarity. Clarity is mostly a matter of selection. At its most basic, it is the effect on style of what linguists call lexical choice, and what English teachers call word choice. Along with word choice, word order or syntax can make critical contributions to clarity. And there are several other stylistic and grammatical factors that cause or erode clarity. And this is where visibility and clarity part company. Clarity is a first order quality of style (like elegance or urgency or readability) and the clarity of a sentence is the result of many different second order elements. Visibility is just one of those second order elements elements in the Style Quincunx. It refers specifically to that quality of language that triggers activity in the "mind's eye." It is neither good nor bad. Clearness or clarity in writing is always a plus (with a few exceptions like Skotism).

"Your essay lacks clarity," students are told. But is this any help? What is cloudier than language? Words are endlessly shaded, encrypted, and spun. And they get tangled and entwined in an infinity of  ways. If "get clarity" simply means, "be clear," fine. That's a good thing. But it's like saying, "Be funny when you tell a joke." Well, yes. I'd like to. But just how do you do that?

A word is a dirty thing, saturated with connotations, associations, derivatives, and implications. And two words get even dirtier as they rub together and smudge each other. Three words and beyond, you've got a real mess. Clarity, as a stylistic goal, is the effort to clean up this mess. It can happen even without an effort. A word in the grip of its use in a particular sentence usually moves towards clarity. "Hand" can be the thing on your wrist, the thing on the clock, the person working on a ship, a synonym for help, or a supreme court justice. But put it in a sentence and suddenly things clear up: Keep your hands to yourself! And yet . . . and yet, somewhere in our brains, the sound that makes that word "hand" in that sentence has all those other meanings riding along with it.

Terms like precise, exact, and vivid  float in the atmosphere around the subject of clarity. And yet clarity itself can be pinpoint precise, like a microscope or a laser pointer, or it can be vast and loose like the sky or a high-end sound system.  The selected word can capture a tight, clearly defined subject like backbone captures spine. A writer can also be quite clear about very loose subjects like miasmas or disasters or populations. One can clearly see a murky patch in a crystal clear river, or a cloudy sky.

Clarity in sentence making, like hilarity in joke telling, is a perfectly good word to describe one possible end result. But by itself it doesn't help much in getting to that goal.

A small white dog came limping out of the trees.

“Eat up, White Dog,” she said. White Dog was old and ailing but he knew how to eat. His head bobbed up and down above the bowl. The woman sat down beside him and watched. When the bowl was empty he looked up at her. One of his eyes was clouded over. She rubbed his stomach and his tail thumped against the wooded steps.

Julie Otsuka, When the Emperor was Divine, p. 10

Or – using sound. image, and even numbers.

At school our new teachers were kind to us, and the students in our classes polite, but at lunchtime they would not sit with us, or invite us to join them in their games, and not a single one of our old friends from before—friends who had once shouted out to us, Your house or mine? every afternoon, after school, and in whose backyards we had dug holes and built forts, friends whose mothers (tall, slender women in sparkling white kitchens) had invited us to stay for supper (“We’ll call your mother”) and whose fathers, on clear nights, had shown us the stars (Now stand still and look up!), friends with whom we had gone skating, every winter, at Ice-Land, and whose birthdays (Jimmy Buchanan, May 26, Edison Wong, October 3, and the Trudeau twins, Cora and Dora, June 29) we still remember, to this day—came up to us to say, “Welcome back,” or “Good to see you,” or even seemed to remember who we were.

Julie Otsuka, When the Emperor was Divine, p. 121

Too much clarity – as everyone who has been disappointed by a watery soup – can be a bad thing.  [See Strunk and White]. Students often mistake urgency for clarity when they are making a point. “Dean being the naked 'snow white fleece' clearly represents Sal’s mother in this case,” writes one student in an essay on Jack Kerouac's On the Road. The author my feel this is the case, and may be hoping you agree, but it’s anything but clear in the context of the scene in On the Road. Tossing in "clearly" after the quotation doesn’t clarify matters at all. It just seems needy, in an unflattering way. Better to understate case and let the reader decide than to jump up and down declaring clarity for a sentence that is anything but.

This low bow that clarity accords to unclarity is echoed in our literature. In so many of John Cheever’s stories, insight and understanding only happens with the advent of rain. And in Kerouac’s, On the Road, what little clarity Sal, the narrator who claims to have only confusion to offer anybody, has happens usually under rain, cloud, haze, or fog. The idea seems to be that in certain isolated circumstances, extracting clarity from the complexity of life will happen only as the mind is wrapped in a dilated entanglement of ideas.