What is an Essay? 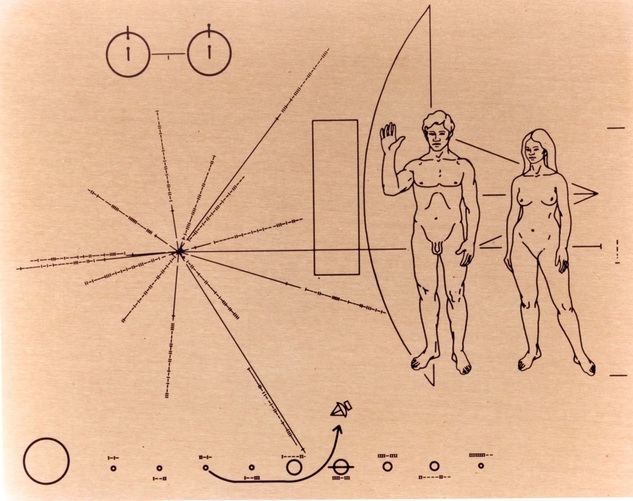 ​Essays are various.  What you are reading, for example, is an essay. But, wait, where's the thesis statement? There's supposed to be a thesis statement in the first paragraph!

Sorry, not this time -- but it's still an essay. Why? Because I say so, and I say so with an authority that can be found in the word itself: essay, from the French essayer "to try."  That's where to begin.

Does this means that if I want to write an essay, all I have to do is to try to write an essay and, bingo, it's an essay? Yes, it does. Of course,  it might be a very bad essay. But it was a shot. And it could be a very good essay and still not look anything like the over-hyped model essay in the SAT prep book with its five sacred paragraphs, its obligatory thesis statement and topic sentences and frog-marched transitions.  That puppy is 0nly an idealized version of just one of many kinds of essays. Many, many kinds of essays.

To illustrate: In 1972, NASA sent the Pioneer 10 space probe on its way to Aldebaran, a giant aging star around 65 light years away. With the probe went a selection of images of earthly stuff NASA figured Al and Debara might want to see. Among the schematized images of our solar system and a hydrogen atom, was (is?) a line engraving of a human couple, both 30-something, buff, naked, and likely Norwegian. These two guys are like that five-paragraph essay. True, they are human but they don't look anything like Little Richard or Mother Teresa or Albert Einstein or your grandmother or your baby sister, who are all far more interesting than these two cut-out jokers. So, yes, the SAT essay is a "cut-out" essay, but it's only a pale and remote representation of what an essay can be.

Essays are like people: slippery, polymorphous, and diverse. So mess around. Take shots, essayez, try. Most tries in the real world do fall short. But if you don't go at it from the start with a kind of playful, tentative, let's-see-what's-gonna-happen-here attitude, chances are you will make something more like a contract, a papal encyclical, or an accident report, something no one will much want to read. The essay is bigger than all of this. It can come in all shapes, sizes, and styles. And your five-paragraph English class essay is just one idealized shape. In fact, it's a shape you will probably never see again after your freshman English class in college.

The Essay as a Rhetorical Form


Despite all its wily shape-shifting, the essay is still an identifiable form of prose, which is to say it is a particular kind of writing that stands apart from other kinds of writing like, say, novels or sonnets or letters or instruction manuals or musical comedies. But there is a deal of wiggle room around the question of what is and what isn’t an essay.

Take manifestoes.  A good manifesto could be an essay. For example, the famous letter Martin Luther King, Jr. wrote mostly while he was detained in a Birmingham jail is widely repackaged as an essay, but it takes the form of a letter and arguably a manifesto.

Or what about The Communist Manifesto? It has some of the earmarks of an essay even though it is comprised almost entirely of a long list of declarative assertions like this one: The need of a constantly expanding market for its products chases the bourgeoisie over the entire surface of the globe. It must nestle everywhere, settle everywhere, establish connexions everywhere. ﻿

But Marx and Engels meant their manifesto to rouse a global population of readers to a bloody cause, a sort of call to arms in essay form. So while its prose style reads like a cross between a police report and a Dear John letter, the liveliness of its argument holds it together as an essay.

Personally, I can go just so far in tolerating things that are not intended as essays being called essays. I don’t like it when greedy publishing companies chop out excerpts of full-length books or novels and repackage them as “essays” for their textbooks. If Emerson wanted Chapter Six of Nature to be an essay he would have published it in The Dial as an essay. If Annie Dillard intended the chapter in An American Girlhood about her mother to be an essay, she would have said so, or published it in Harpers.

And that brings up one of my favorite thing about essays. They all begin as what are technically known as ephemera. Interesting word, ephemera. Comes from the Greek, ἐϕήμερος , lasting only for a day, (epi hemera) and used originally to describe short hot fevers and certain bugs like like mayflies or dayflies who see only one sunrise and one sunset. Essays originally appeared, and still mostly appear, as a form of journalism. Notice that the French word for "day" (jour) takes a bow here. Just one day: jour-nalism.

All of this leads to the point that essays, by and large, are written to be read on one day and used for filleting fish the next. Yet, we all know some essays survive their day and live on as immortal documents in collections and textbooks that serve as a sort literary life-support systems. So here's a takeaway contradiction:  Don't write your essay as if you were writing an immortal document. Write it as a try, a stab, a shot at something. Go at it modestly. Picture it at the end of the day sinking into the garbage can spattered with fish guts. Do this and there's a chance that what you write may outlive tonight's trashcan cats.