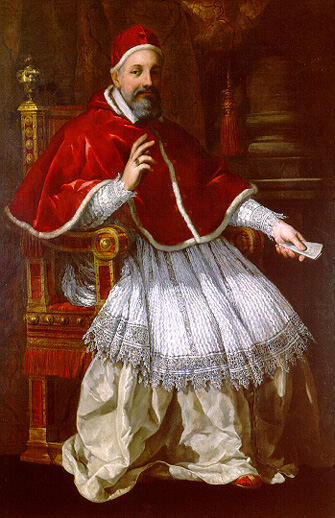 Pope Urban VIII by Velázquez
Is an Idea a Sentence?


He thought he saw an Argument
That proved he was the Pope.

Ideas happen in the head. They seem to come spooling out of nowhere, and gather clarity and form as they draw our attention, or we intentionally lock in on them. Usually they come to us murky and vague in shape but then eventually become more crisp and generally end up funneled into the same familiar condition:  ready to be uttered or written down as a sentence.

Are these sentences end-products or have they always been there with the idea? Is the idea, any idea, a sentence from the start, one that we only become aware of as the idea grows in our head.  Is it true that any idea we may have immediately starts gathering sentence properties at its moment of birth and are those sentence properties already part of the idea in an arena buried “out of mind”  somewhere in our brains?

We may see a dog and just see a dog. We may see a dog and in our mind hear the word "dog." If this happens, it is surely not the only thing on our mind. In fact, our mind is teaming with stuff when we see the dog and the word dog occurs to us. There may be an awareness of the kind of dog. Do we know this dog? Is this dog a threat? A delight? What does the dog's face say? What's behind the dog? Next to the dog? Are we late for lunch. Our friends will chide us. Is Jack coming? Is that a crow? Our feet are wet, etc. etc. So, in that blizzard of thoughts, observations, emotions, and memories (quanta and qualia) that are imposed on and surround our image and naming of the dog, there may be hundreds of sentences or sentence-like thoughts taking shape in our head, and among them are some that have to do with the dog. So the dog in linguistic terms in not just the word "dog." Rather it's the word dog, caught in a mesh of all sorts of other language, much of it in sentence form or in the process of falling into sentence form.

It may be the case (and I believe it is), that the possible sentences about the dog have started to take shape at the instant the idea of the dog entered our consciousness.